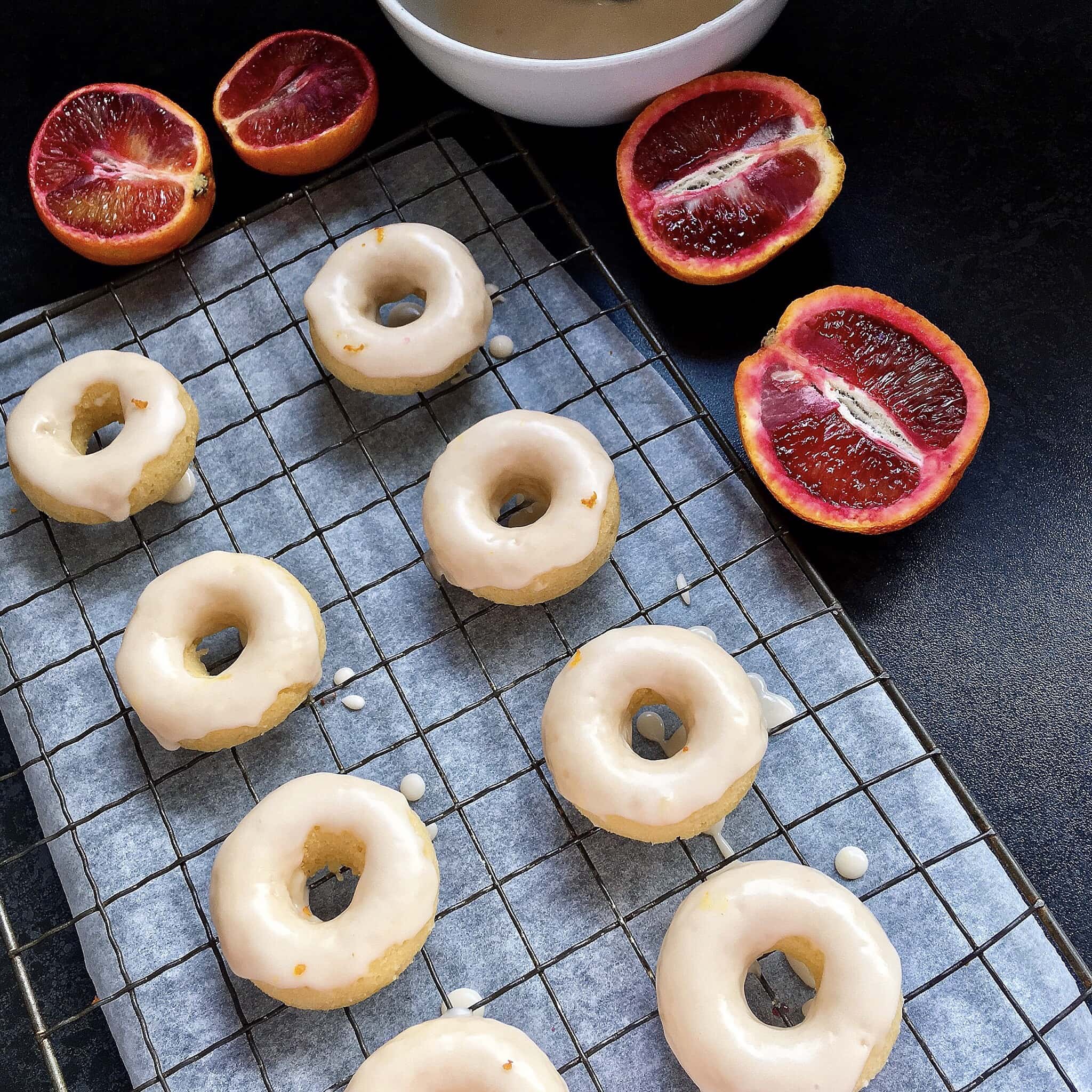 When blood oranges start to appear in the shops I start stocking up like a crazy person. I love them. This year it’s been a little harder to find them for some reason. I’ve only seen them in the Co-op so far and the last couple of times I’ve been in they’ve been reduced to 50p for 4 – you know I love a bargain so I’ve been snapping them up. Unfortunately I’ve not seen many true red ones yet – so far most of them have been disappointingly like normal oranges!

So when I found a couple that were that gorgeous dark red colour – how you would expect a blood orange to look – I had to save them for a new recipe. 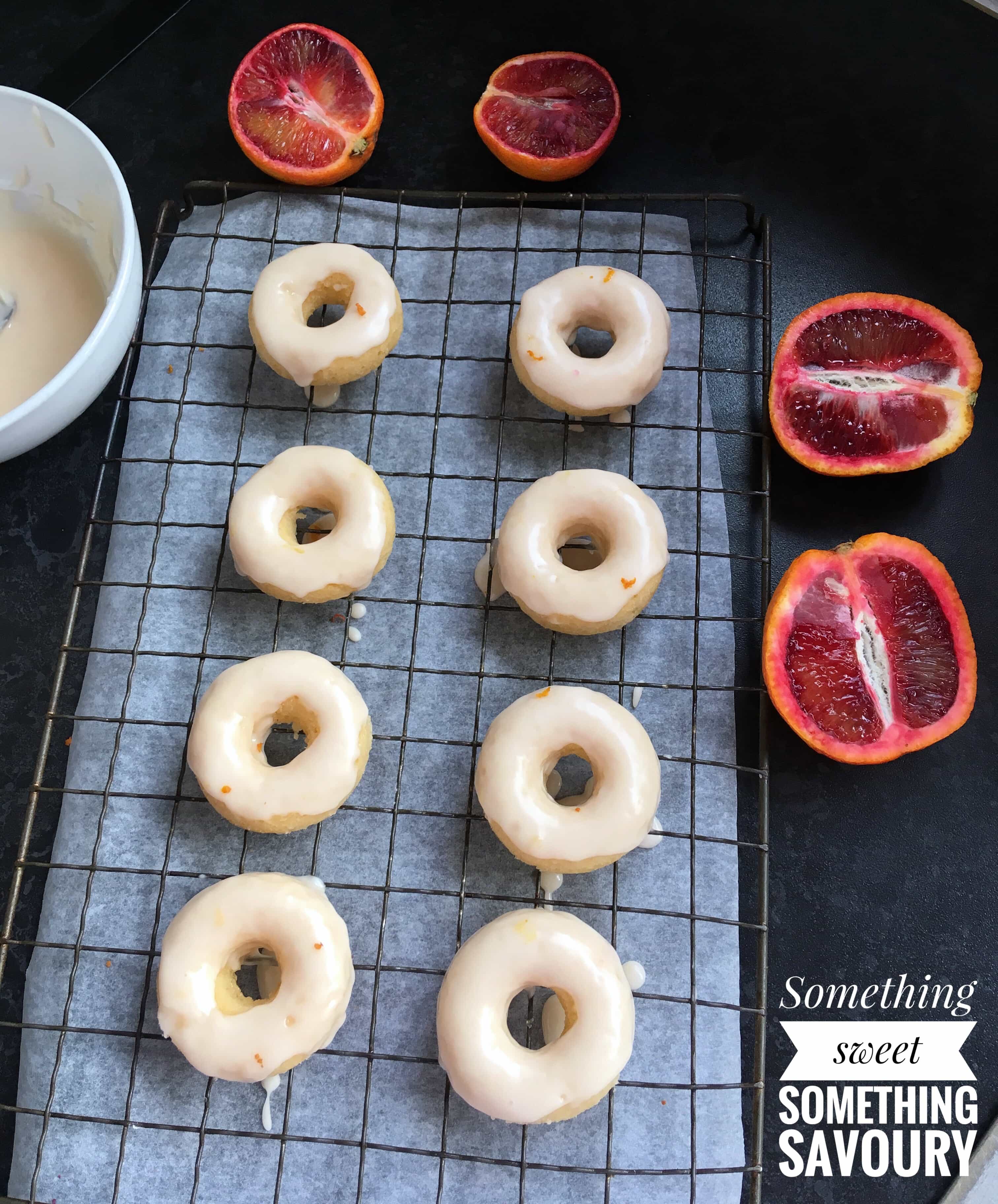 My silicone mini donut mould has been sitting unused in the cupboard for a long time, so last weekend I decided to put that right and make some baby donuts!

Before I show you the recipe, I need to talk to you about something that I discovered recently – homemade cake goop. It’s a serious game changer. It’s just equal parts oil, trex and flour. You mix it all up until you have “goop”. You store it in the fridge (it keeps indefinitely) and whenever you bake a cake, give the tin a coating of this amazing stuff.

I have used this on really fancy, patterned bundt tins and the cakes just slide right out. The recipe for cake goop is right here on I am Baker.

If you’ve ever had issues with cakes sticking to tins, I highly recommend you try it. Let me know if you do! 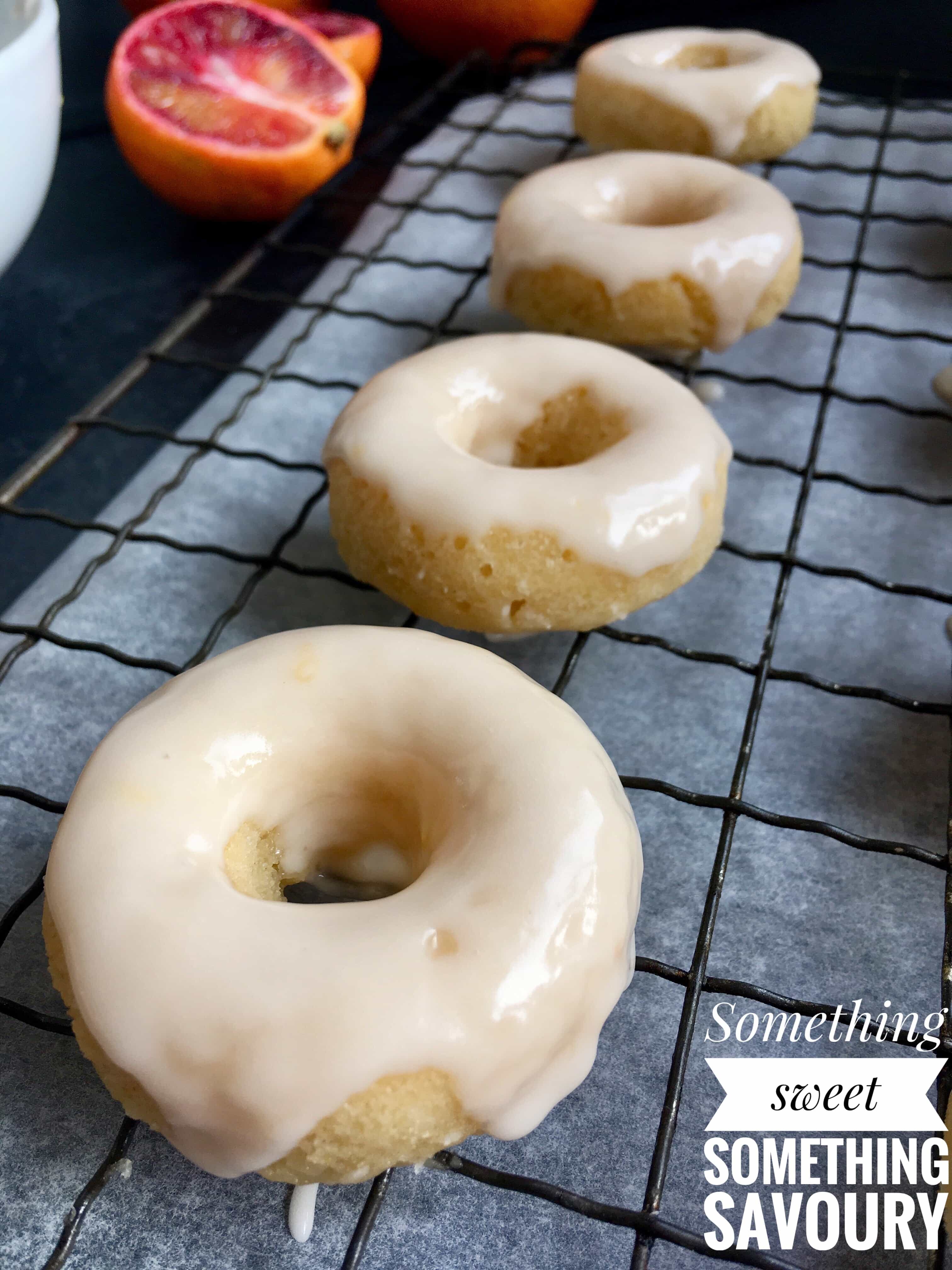 Soft, fluffy baked vanilla donuts with a zesty blood orange glaze. I’m really happy with this recipe – I hope you love it too! 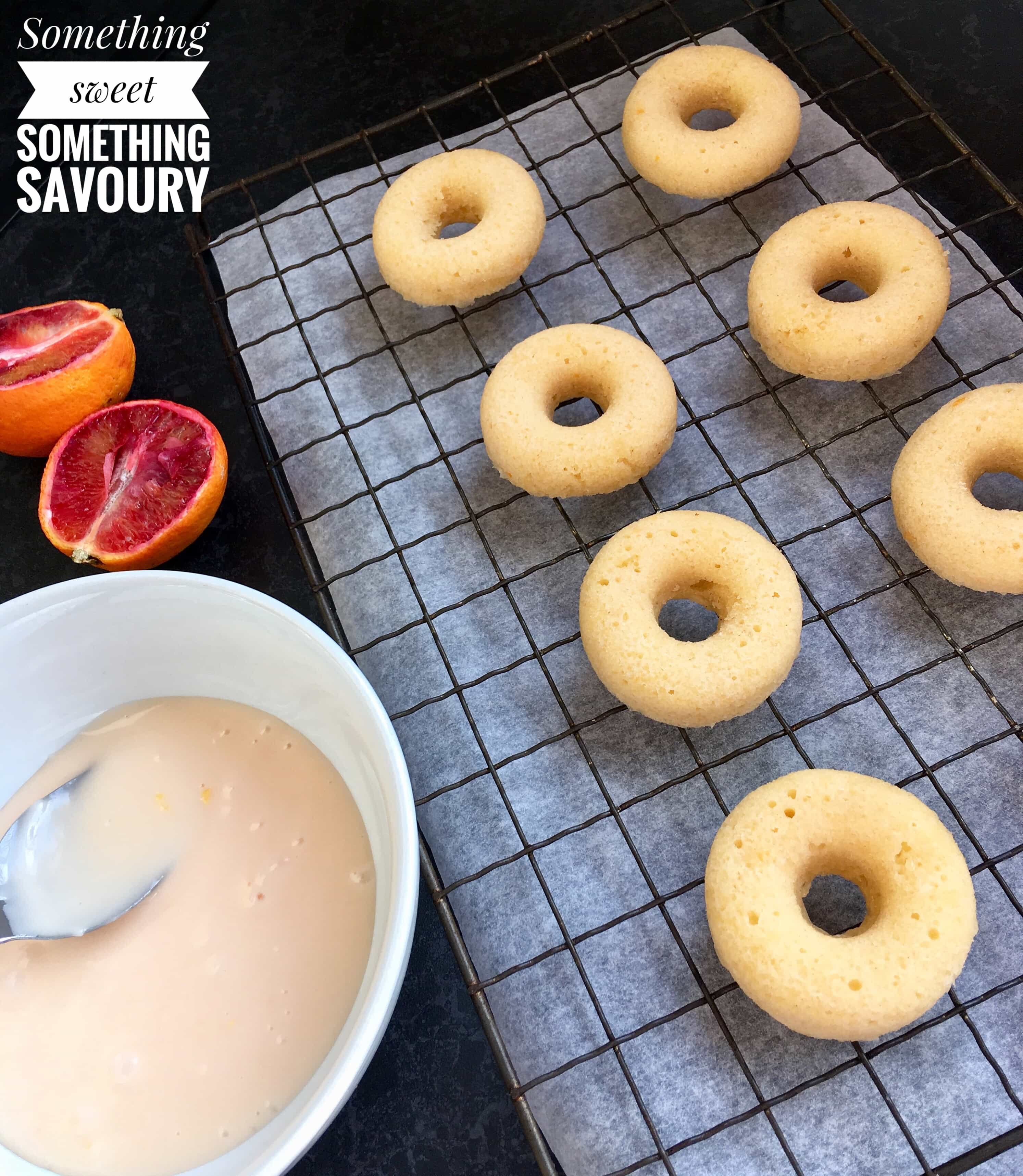 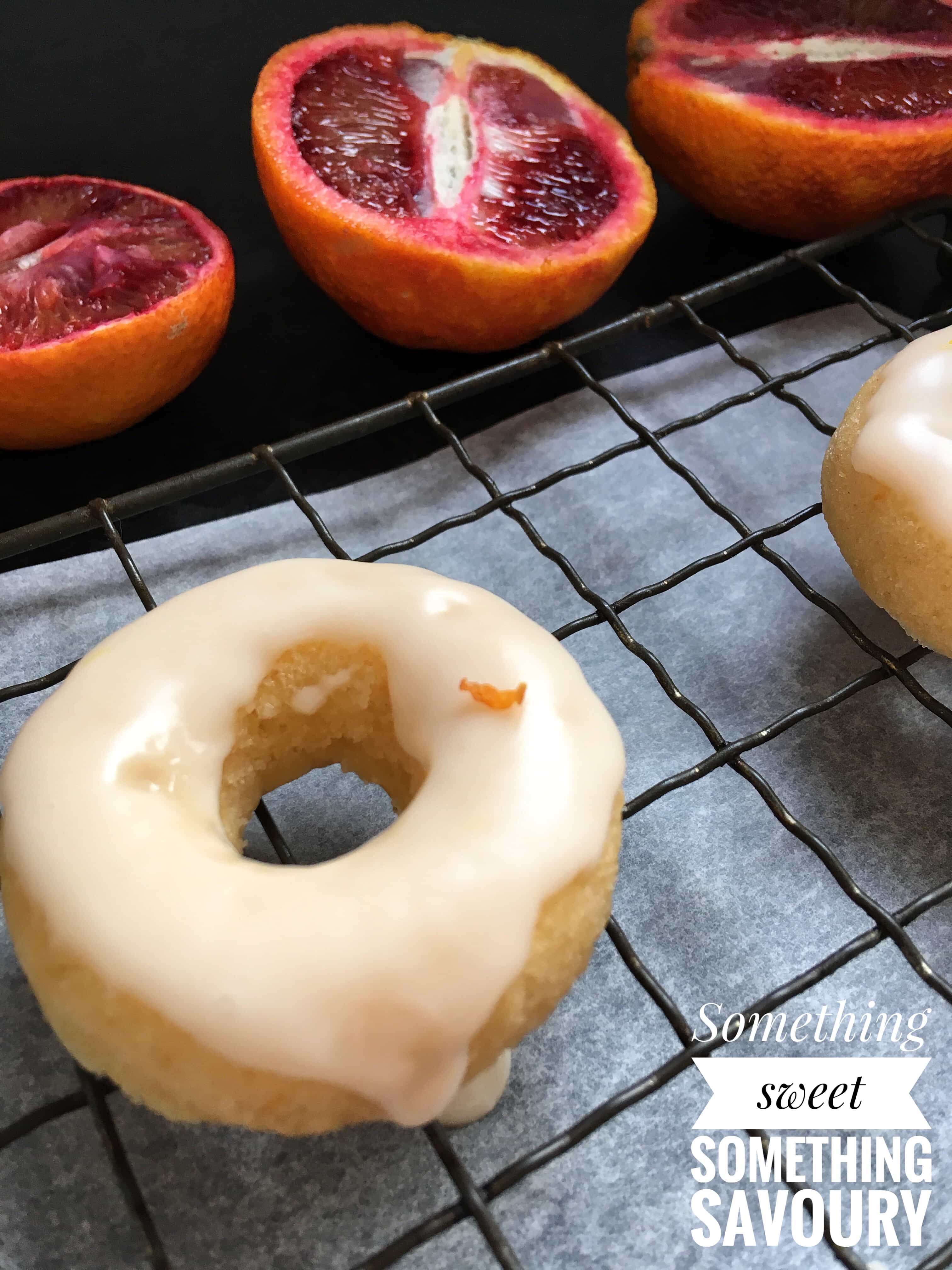 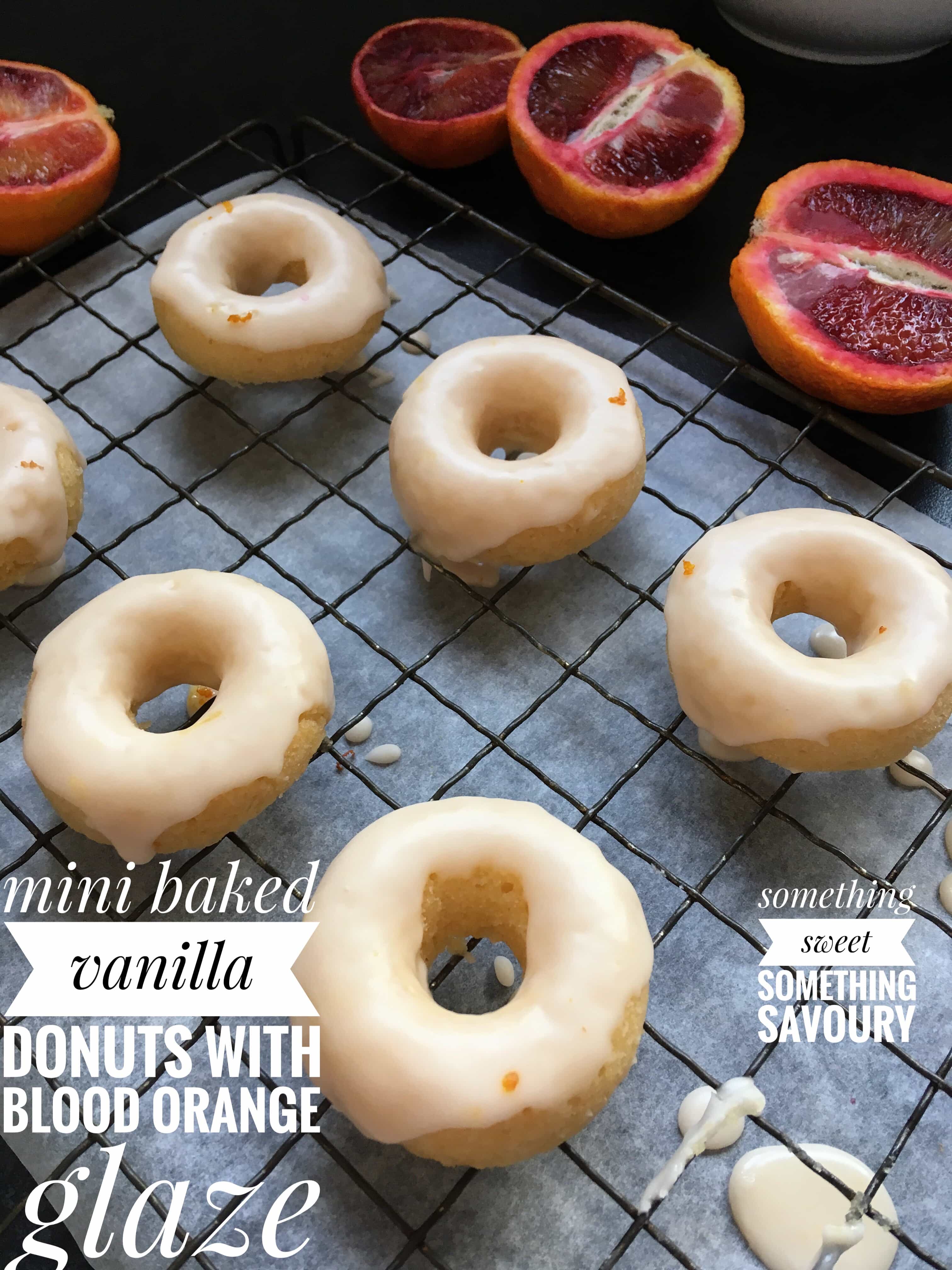 If blood oranges aren't available, normal oranges will of course be fine.

Soo tempting! 🙂 I have never had baked doughnuts before but they look and sound delicious, especially with that blood orange glaze! I don’t think I would be able to stop at one lol. Great tip about the goop! 🙂

Thank you! ? I have to say, the donuts disappeared so quickly! They were all gone by the end of the day ? Good excuse to make more I guess! ? The goop is fantastic! I’m seriously impressed with it ??

My son would love these! We don’t have blood oranges in the stores yet-not sure why but I will be looking for them 🙂

These look really delicious ,and the colours of those blood oranges is just stunning aren’t they?
Also I just read your about section, I would never have guessed you only take photos on your phone. They are such great photos!
thank you for linking to #Bakeoftheweek x

Thank you – I love blood oranges so much! I think they are my favourite winter fruit ? Aw thank you so much! That’s a lovely thing to say. ? I have been trying to improve my pictures lately so that means a lot. xx