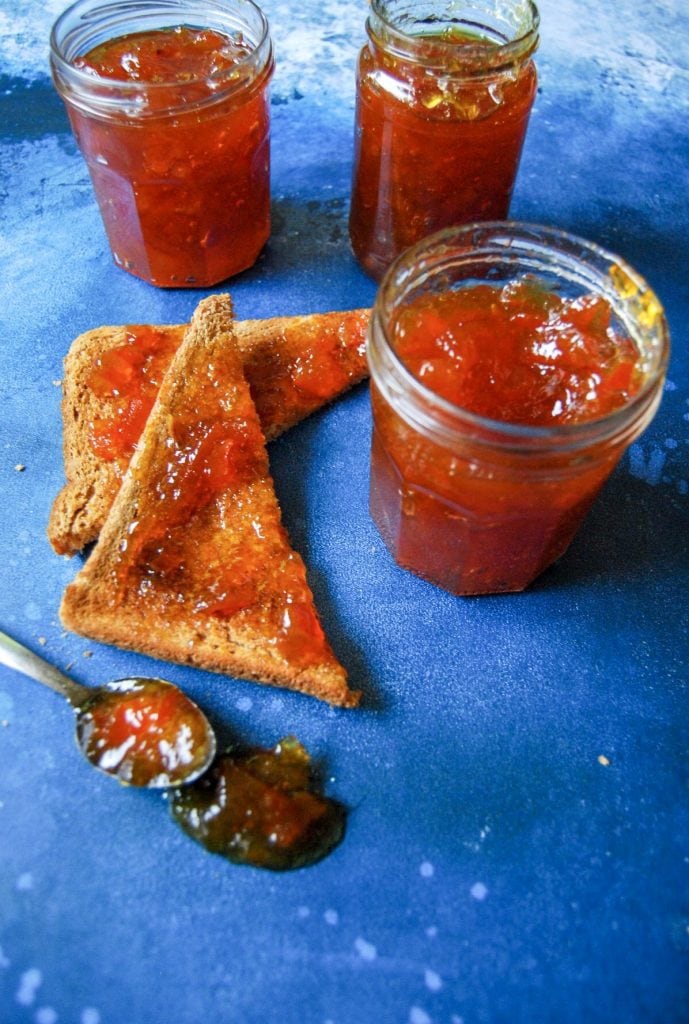 Marmalade. I love the stuff. I spread it thickly on hot buttered toast, stir spoonfuls in my porridge, spread it over joints of ham and use it to make this gorgeously sticky orange marmalade cake. 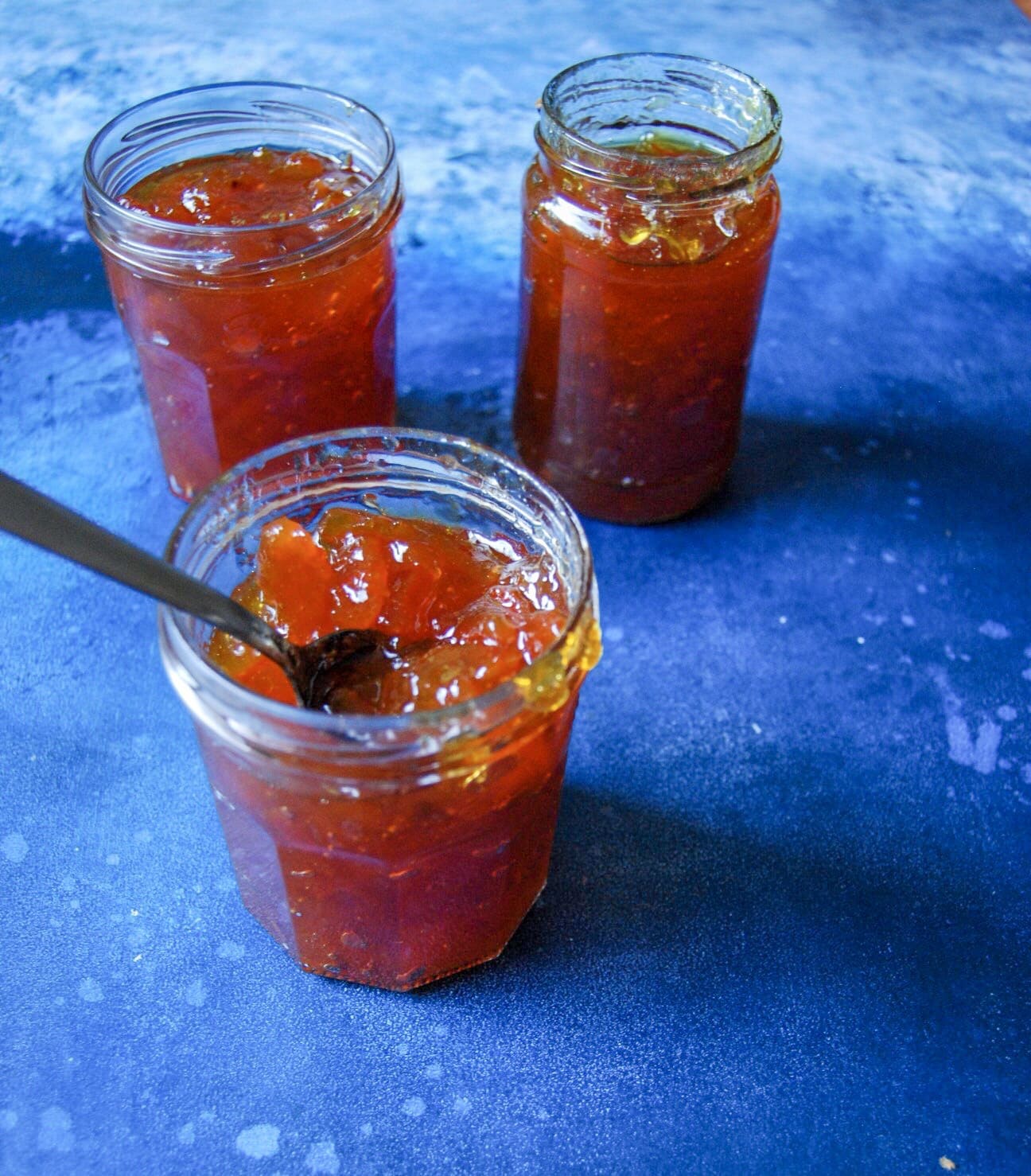 If you’ve always fancied making your own marmalade but you’ve been slightly put off by how laborious it all seems, then this is the recipe for you. This easy Seville orange marmalade is made with the whole fruit method, which I first read about in Sarah Randell’s book “Marmalade: A bittersweet cookbook.”

What is the whole fruit method for making marmalade?

Basically the whole fruit method involves cooking the whole fruit in simmering water for the best part of a couple of hours. The fruit is then juiced, shredded and cooked with sugar.

Using this method gives a darker and less delicate result than the traditional jelly method, but it’s certainly less time consuming and is a good option if you’re short on time. Don’t get me wrong – this method isn’t completely hands off! 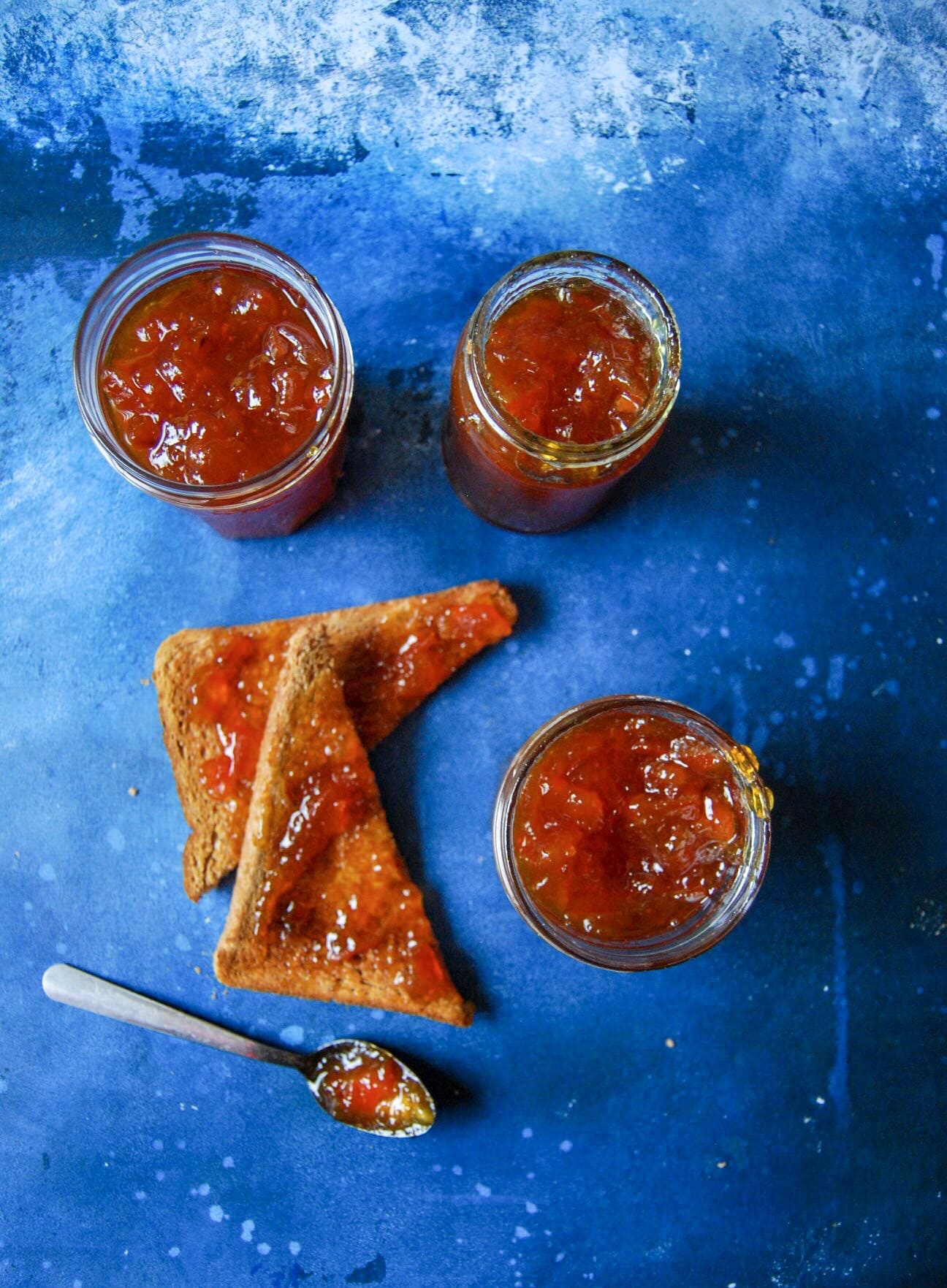 You still have to shred the orange peel, but I find this kind of thing pretty relaxing – I make myself a cup of tea, switch the radio on or a good podcast and get slicing.

How thickly/thinly you slice the fruit is a matter of personal preference – some people prefer long thin shreds, while others favour short, chunky pieces. 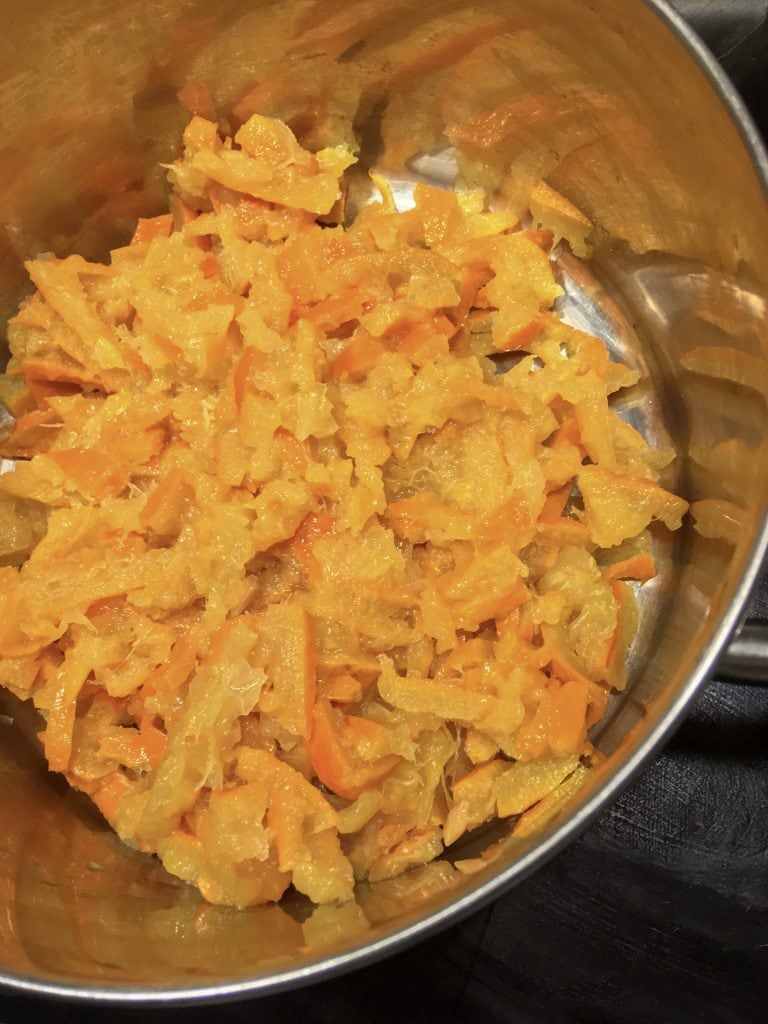 A shot of whisky, rum or Cointreau stirred into the marmalade before spooning into the jars is a great addition but of course, entirely optional.

Make sure you sterilise your jars before using them –  you can either put them in the dishwasher (using them as soon as the dishwashing cycle ends) or you can give the jars a good scrub in very hot, soapy water before rinsing them and placing them in a low oven at 110C/90CFan for about 10-15 minutes.

You also need to fill the jars with marmalade while they are still hot. This will kill any lingering bacteria which can cause the marmalade to become mouldy.

At the time of writing this post, Seville oranges were still in plentiful supply in my local greengrocers – so hopefully you’ll be able to get your hands on some before they disappear! 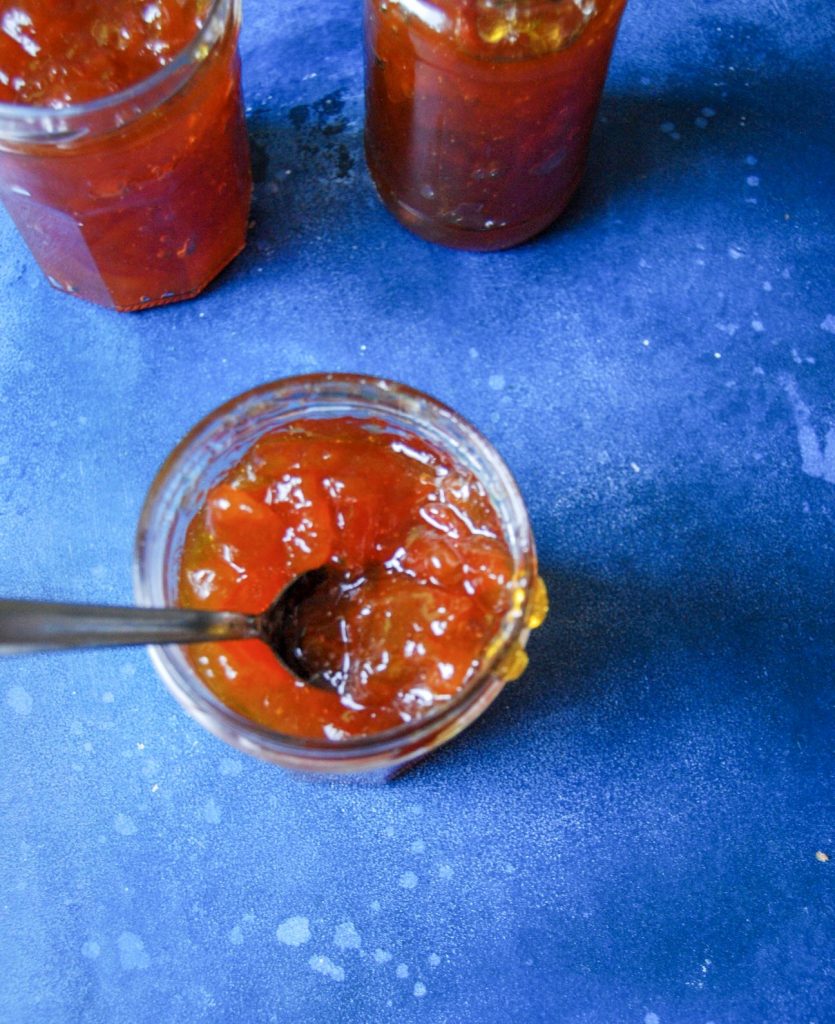 Pin this recipe for later 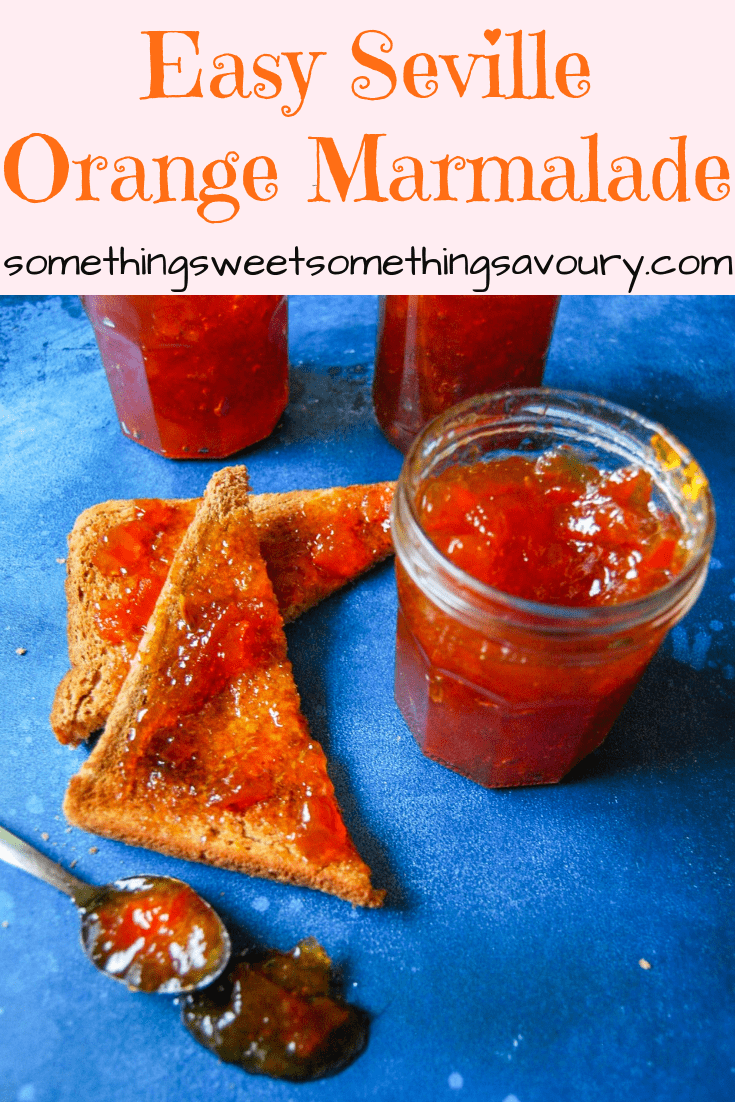 Store the marmalade in a cool, dry place.  If you've sterilised the jars correctly, the marmalade should keep well for a couple of years.

I can’t say I’m all too keen on marmalade (I don’t buy it let alone try and make it), but adding a touch of spiced rum seems like the perfect addition for my tastebuds!

Sounds delicious. I love marmalade and this version seems to take it one level up.

Thanks! I’m really enjoying it on toast in the morning 🙂

This looks gorgeous, and sounds even better!

Seville oranges freeze well. Buy enough for another batch and put in the freezer. Who knows if we will be able to get hold of them next year, post Brexit.

I use 4 pints water for boiling the oranges first.