Making apple butter is a total breeze with the Instant Pot – you don’t even have to peel the apples! This small batch recipe makes 2x350ml jars. 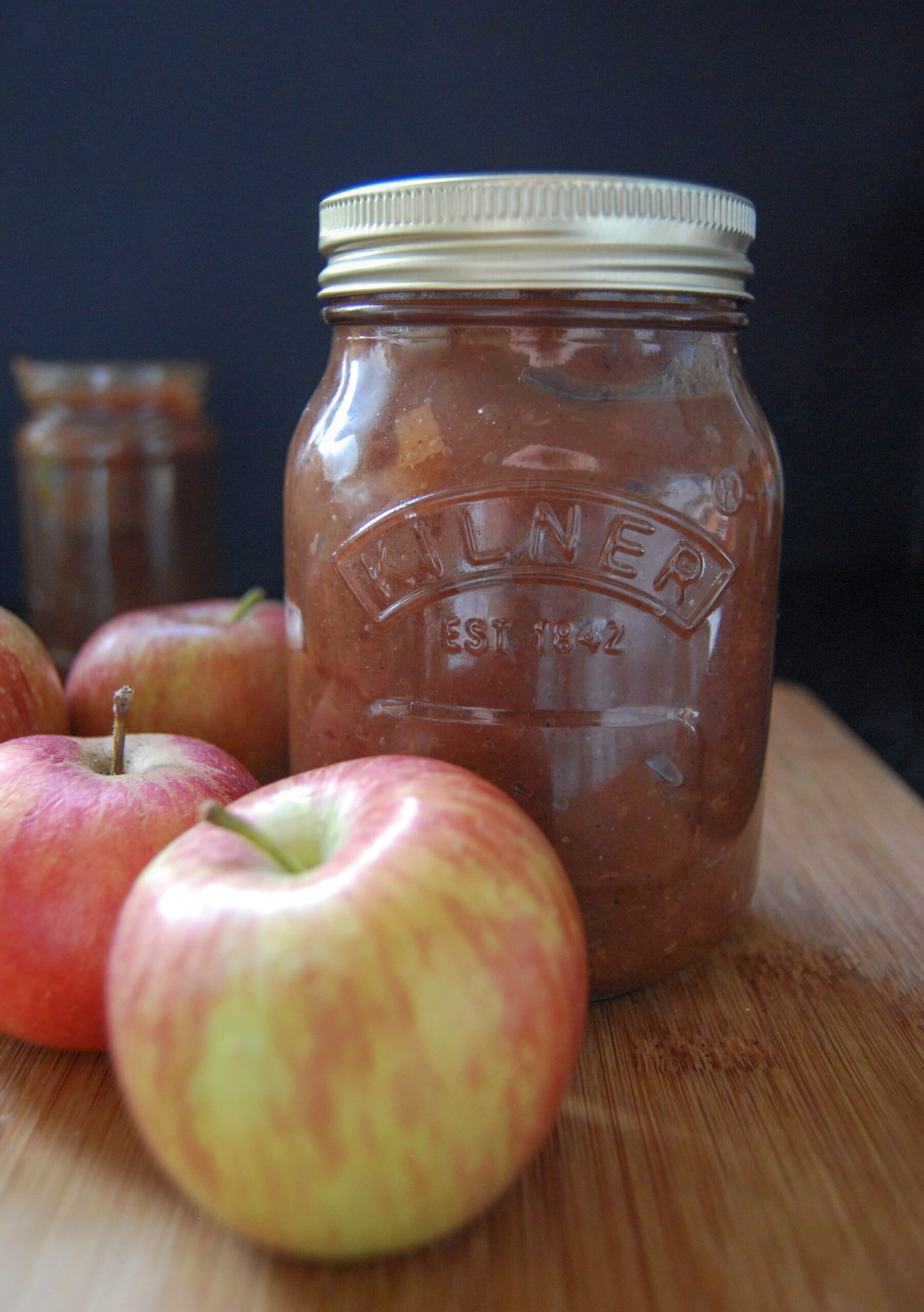 what is apple butter?

First of all, it doesn’t actually contain butter.  I know – confusing, right?  Well, it is at least for people in the UK, where apple butter isn’t exactly well known.

It’s basically a reduction of apples with sugar, spices and liquid.  Think of it as a thick, double concentrated apple sauce – but it’s darker in colour than apple sauce due to the caramelisation of the apples and thick enough to spread on a slice of bread.  The consistency is sort of similar to a fruit curd.

Americans tend to use apple cider to make apple butter, but I only recently learned that apple cider in America is actually unfiltered apple juice.  The apple cider that we’re used to in the UK is known as “hard cider” across the pond.

So if you’re ever reading an American recipe book and see a recipe that calls for apple cider,  they are talking about unsweetened apple juice.

I wanted to keep things as simple (and cheap) as I could for this recipe so i simply used water for the liquid, but do feel free to try it with 100% pressed apple juice.  If you do, let me know how it goes!

what’s the difference between apple butter and apple sauce?

The main difference between apple butter and apple sauce is the cooking method.  While they are both cooked in pretty much the same way – with sugar, water and spices – apple butter is cooked for much longer, resulting in a super concentrated apple spread.

what can i do with apple butter?

So much!  Use it as a spread, use it in baking such as this gorgeous double apple caramel bundt cake , mix with yogurt for breakfast to have with granola and for the best pork chops you’ll ever eat, drop a spoonful of apple butter in the pan while the chops are cooking – it is SO delicious! 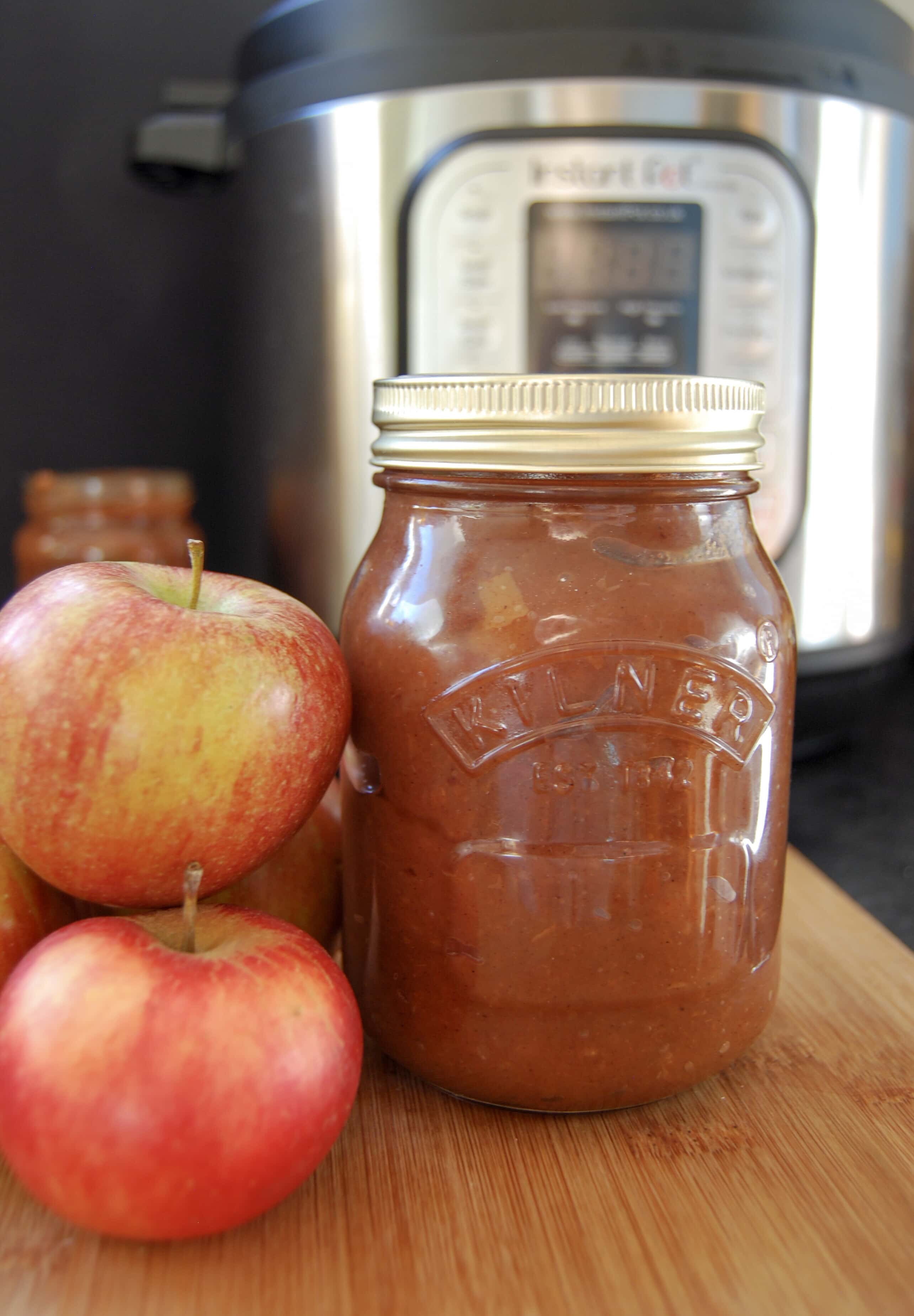 I’ve tried making apple butter a few different ways, but I found the Instant Pot method was by far the easiest way. When the pot comes up to pressure and the timer begins, it takes just 10 minutes.

You don’t even have to bother peeling the apples – obviously though if there are any bad bits on the apples, you’ll need to cut them off.

Don’t own an Instant Pot/pressure cooker? No problem. You can still make this recipe on the hob – just make sure you keep the heat low and you’ll need to stir the apples fairly regularly to ensure they aren’t sticking to the bottom of the pot.

You’ll need a couple of sterilised jars for your apple butter – putting them in the dishwasher will suffice, but be careful not to put your finger inside one when taking them out – otherwise you’ll have to sterilise them again!

If you don’t have a dishwasher, give them a good scrub in very hot, soapy water.  Place them in a very low oven (100C) to dry out.

I was lucky enough to be gifted a huge bag of apples recently that I used to make this recipe. I believe they were a mixture of Cox’s and Braeburn’s, but you can use any eating apples you wish.

My apple butter recipe is lower in sugar than many of the traditional American recipes – mainly because I didn’t want it to be super sweet, but I also really wanted the flavour of the apples to shine through.

However, reducing the sugar does mean that this apple butter has a shorter shelf life.  But my apple butter has never lasted longer than a couple of weeks anyway so I don’t really see it as a problem.

I’ve added some of my favourite Autumnal spices in the form of cinnamon, nutmeg and ground allspice, which will fill your home with a warming, cosy, country kitchen aroma!

I really hope you try this apple butter – if you do make it I’d love you to tag me in a picture on Instagram!

This apple butter will keep well for up to one month in the fridge.

Makes just over two 0.5 litre jars - it wasn't worth using a new jar for the little bit remaining, so I kept it in a plastic tub in the fridge and used it up in a couple of days.

I love apple butter-this sounds so good, and quick and easy too!

Thank you Nancy ? It’s so quick with the pressure cooker!

This looks and sounds delicious! Bookmarking your post so I can make it one day soon. Thanks for sharing!

Thank you so much! I hope you enjoy it ?

How many pint jars does this make

Hi Kaelan, I’m not too familiar with pint jars, but looking at an online guide I think it would fill one pint jar. You could always double the recipe if you wanted to make a bigger batch.