This Triple ginger, cherry and pecan Christmas pudding is a slightly lighter take on the classic version.  Packed full of boozy fruit and enough ginger to delight any hardcore ginger fan! 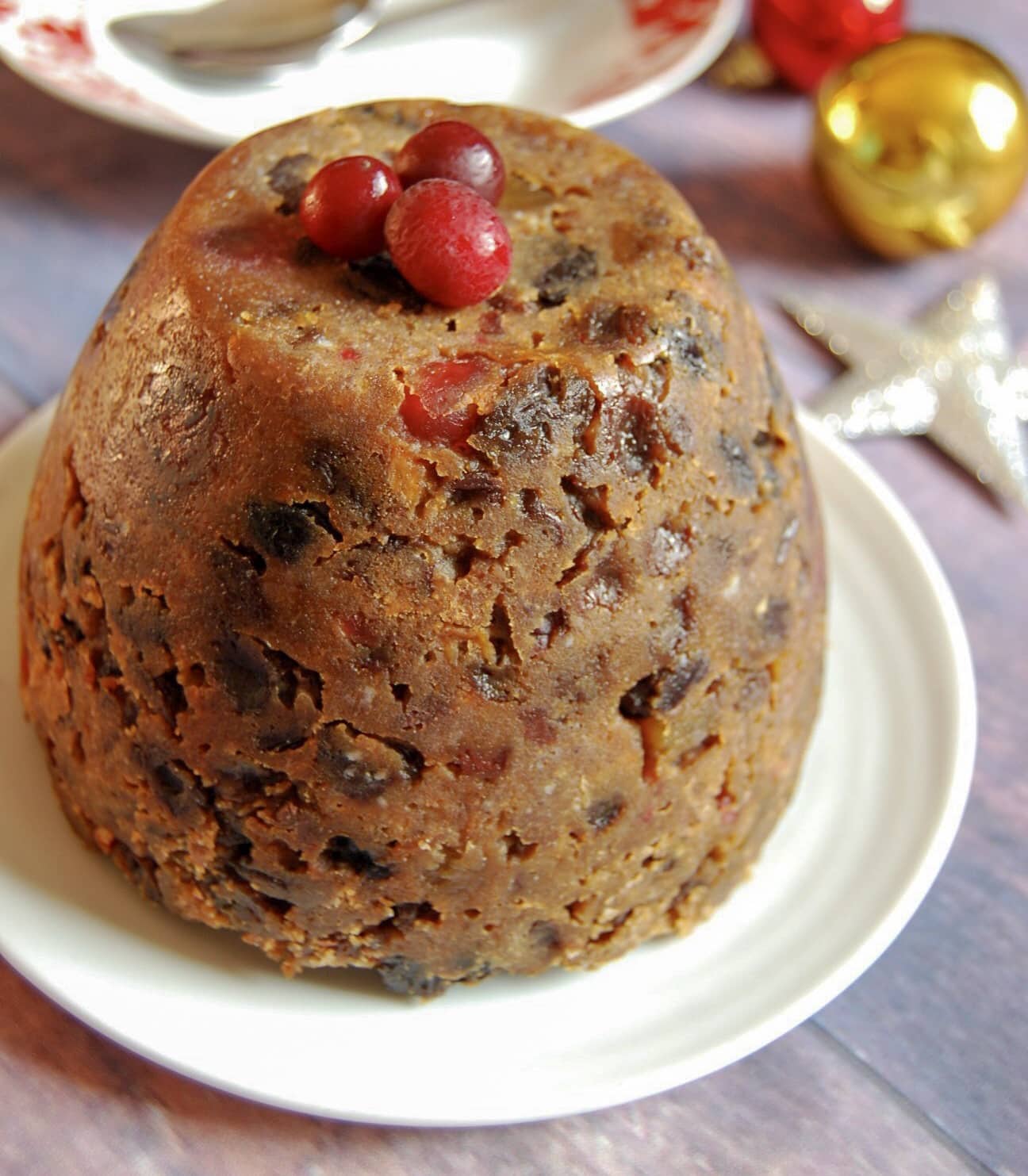 Christmas pudding brings back fond memories of my Gran. She would make one nearly every Christmas especially for the two of us because we loved it so much.

This recipe is very loosely based on her recipe. I hope she wouldn’t mind that I’ve taken great liberties with the original recipe.  This version is much lighter and I’ve used ginger wine and cherry brandy instead of (blast from the past!) Harvey’s Bristol Cream!

I’ve replaced the mixed peel (which I’ve never been a fan of) with crystallised ginger. I don’t remember my Gran ever using cherries in her recipe, but I’ve used them in abundance here purely because I’m a bit of a cherry freak. I couldn’t resist throwing in some pecans for a little crunchy texture alongside the soft fruit. 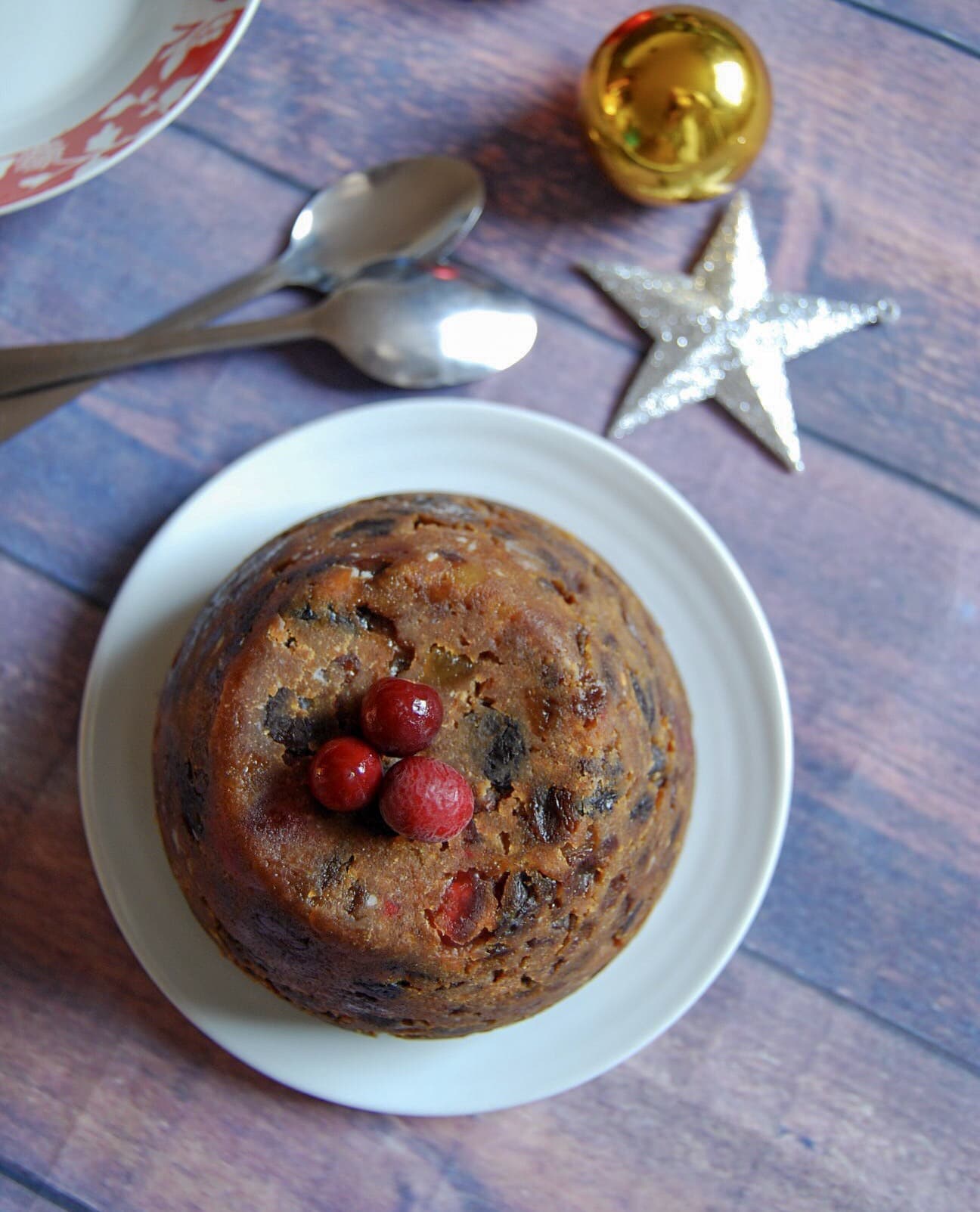 I’ve gone for a TRIPLE hit of ginger in the form of fresh, stem and crystallised. If you are a fellow ginger fan , you will LOVE this. But If you are a little concerned that the pudding will turn out a little too gingery for your tastes, then I would leave out the fresh ginger. But I promise it is not overpowering.  The fresh ginger adds warmth, while the stem and crystallised ginger add flavour and texture.

My Gran used to steam her Christmas pud on the hob in a large pan. She would place the pudding basin on top of a little tea plate and pour boiling water half way up the pan. I remember the windows being all steamed up with the condensation and the rattling noise the plate made!

Times have changed and we now have lots of options. I’m going to give you instructions for the traditional hob method, slow cooker and Instant Pot. I’ve tried and tested this recipe with all of the above methods and they all work perfectly.

If you fancy a change from the classic Christmas pudding recipe, this is definitely worth a try! 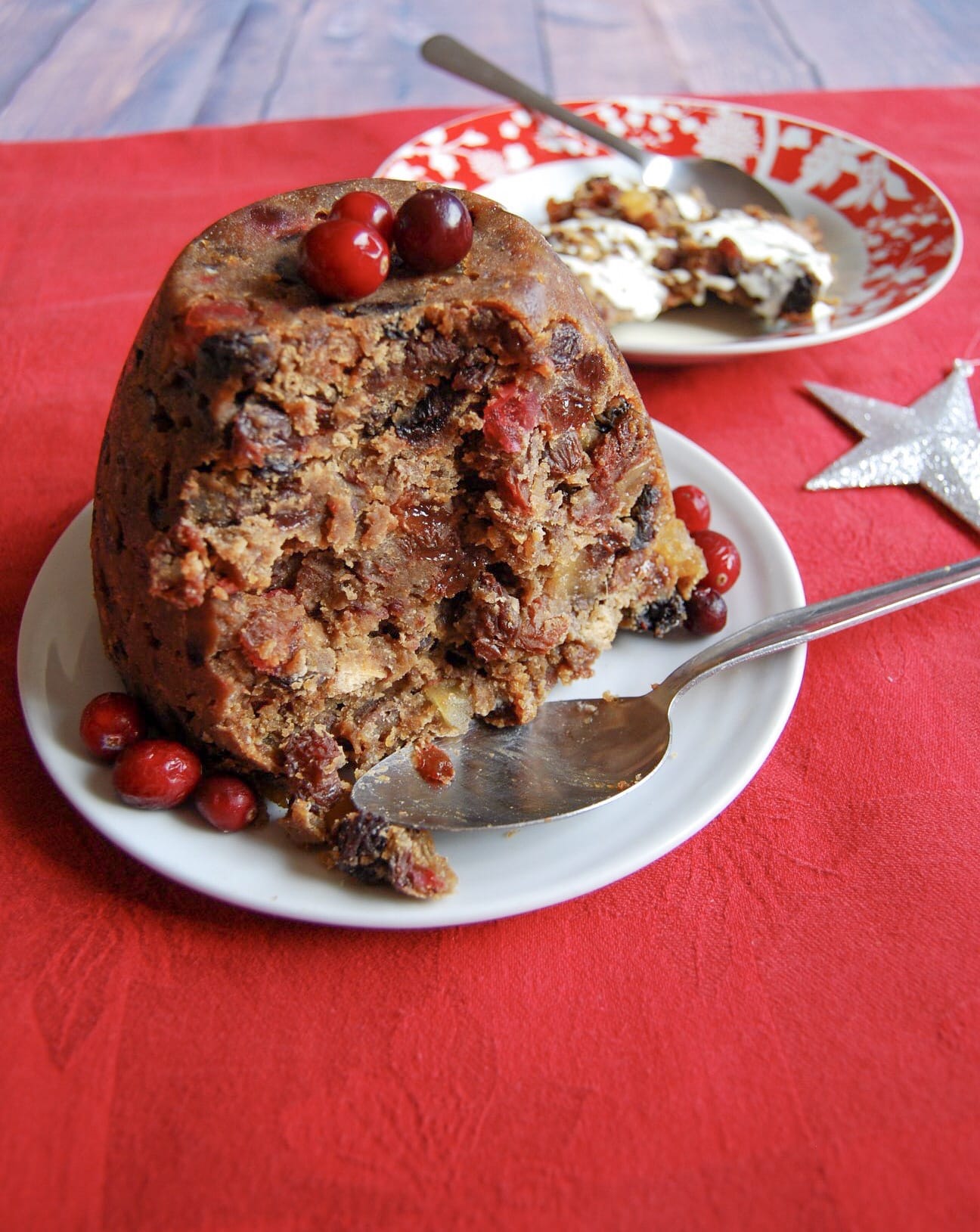 The Christmas pudding in these photographs was cooked in the instant pot on STEAM for 15 minutes, then MANUAL for 35 minutes.  For a slightly darker, richer pudding, extend the cooking time to 1 hour.

Read on to find instructions on how to cook your Christmas pudding in the slow cooker, Instant Pot, or using the traditional steaming method! 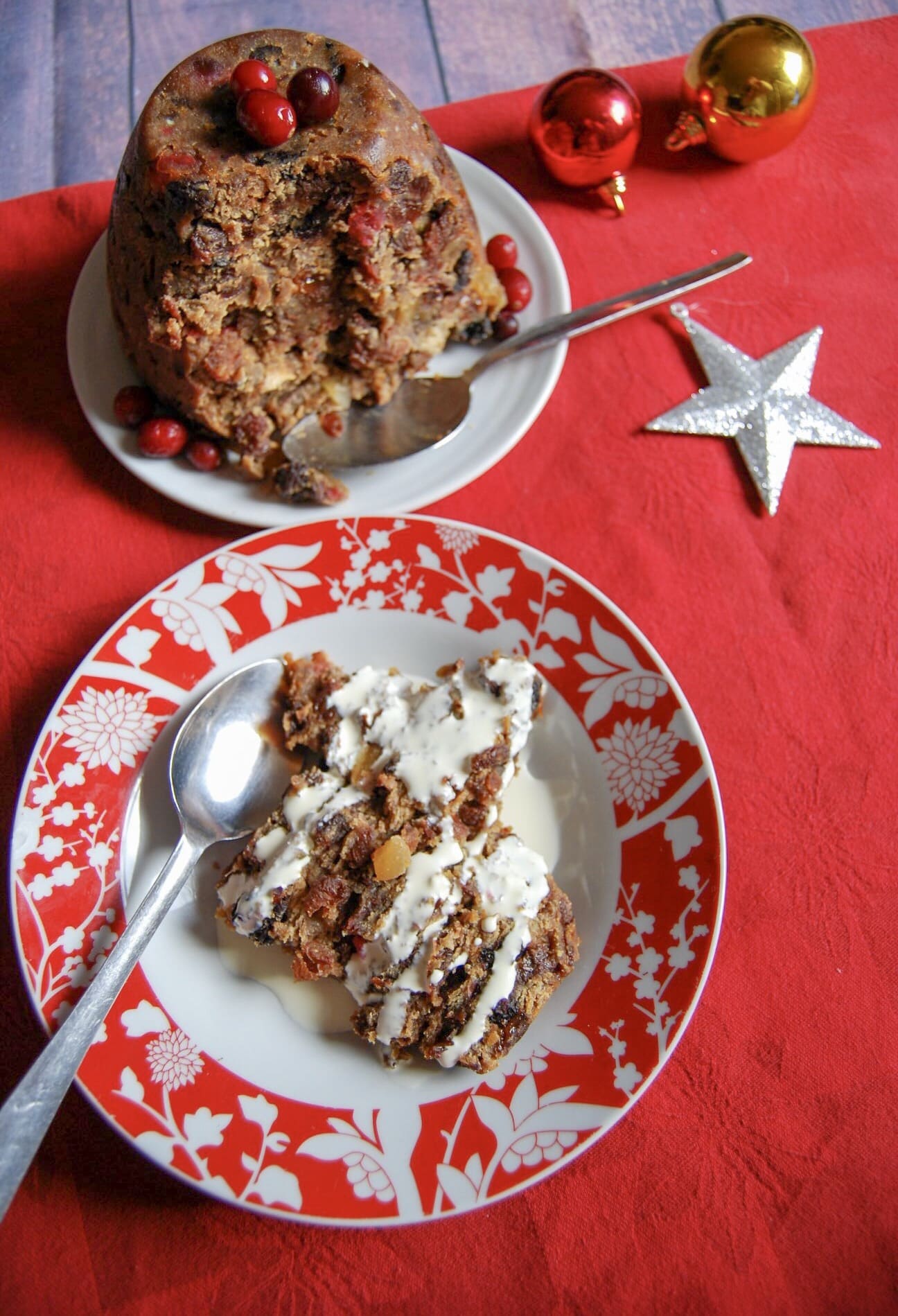 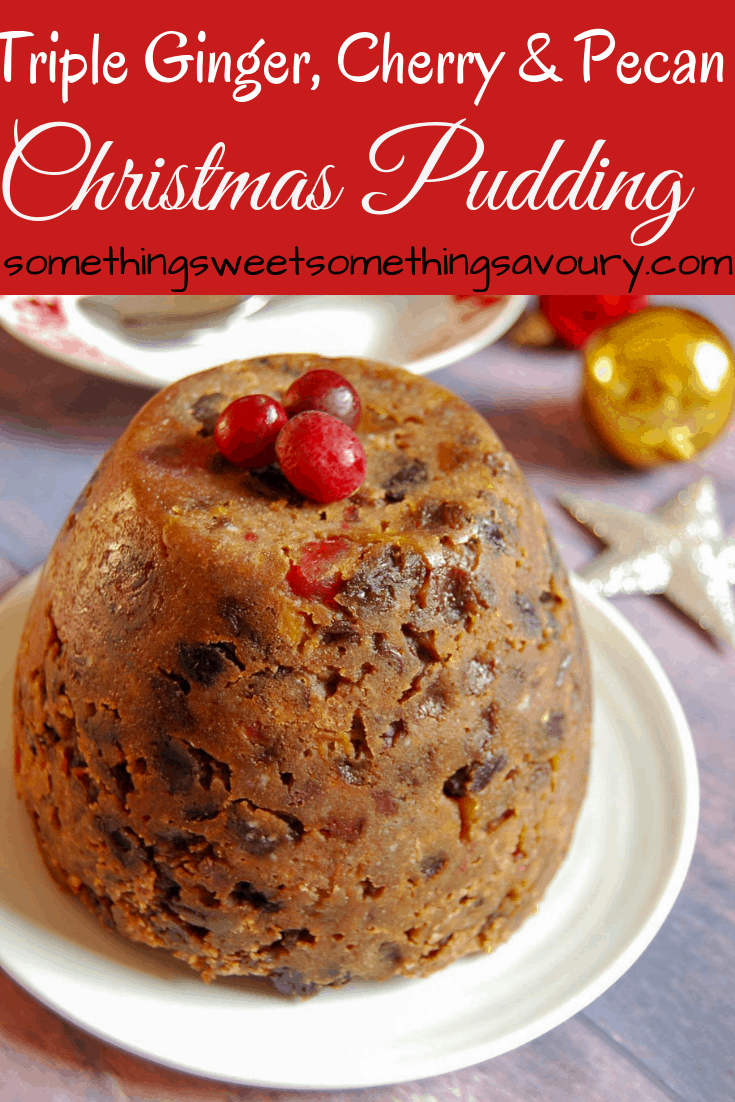 To reheat your Pudding on Christmas Day, simply wrap in foil and bake in the oven at 150C for about one hour OR to free up much needed oven space, preheat in the slow cooker on high using exactly the same method as above for 3-5 hours.

This looks so appealing – I’m looking forward to hear how it turned out! Although I like the idea of slow food, with recipes like these the wait is just so agonisingly long… I made a stollen this year and I had a peak yesterday, but it still needs a week or so before I can really say whether it worked or not 🙁

This looks interesting. I’ve never made Christmas pudding either, but it looks so comforting.

[…] Made in the slow cooker Something Sweet Something Savoury puts a modern twist on figgy pudding with her cherry, pecan and ginger pudding […]

I’m not a big eater of Christmas pudding, but I would happily make an exception for this!