Hands up if you love Jammie Dodger biscuits!

I certainly do! That childhood classic biscuit close to many of our hearts (in the UK at least) has stood the test of time and quite rightly so. If you also love them, you need to check out my homemade jammie dodger biscuit recipe!

If you aren’t from the uk and are wondering what on earth a jammie dodger is, let me fill you in. It’s a crumbly shortbread type biscuit (cookie) with a  jam filled middle. Cute, aren’t they?

They are instantly recognisable with their pretty trademark heart in the middle. The flavours available are strawberry, raspberry and now lemon. There have been a few limited edition flavours, but in my opinion, they weren’t that great really. I haven’t come across the lemon ones yet, but I’m on the lookout for them!

So what can I say about these delicious jammie dodger blondies, apart from the fact that they are even more delicious than you could possibly believe?

I’ve seen a few versions of these jammie dodger blondies on the internet and they all look fabulous. I’ve been meaning to make them for so long.

I finally chose a recipe from Olive magazine, but as usual I had to change it up a little – I can never leave a recipe alone!

why i love this jammie dodger blondie recipe

what texture should a blondie have?

The blondie base is chewy around the sides and a little gooey in the middle, just like a good blondie should be.

They are not meant to have a cake like texture.

If you want them less gooey in the middle, you’ll need increase the baking time by 5-10 minutes. But if you do this, you will end up with something more like a cookie bar than a blondie.

See how the blondie is still slightly soft and fudgy in the middle? That’s the dream.. 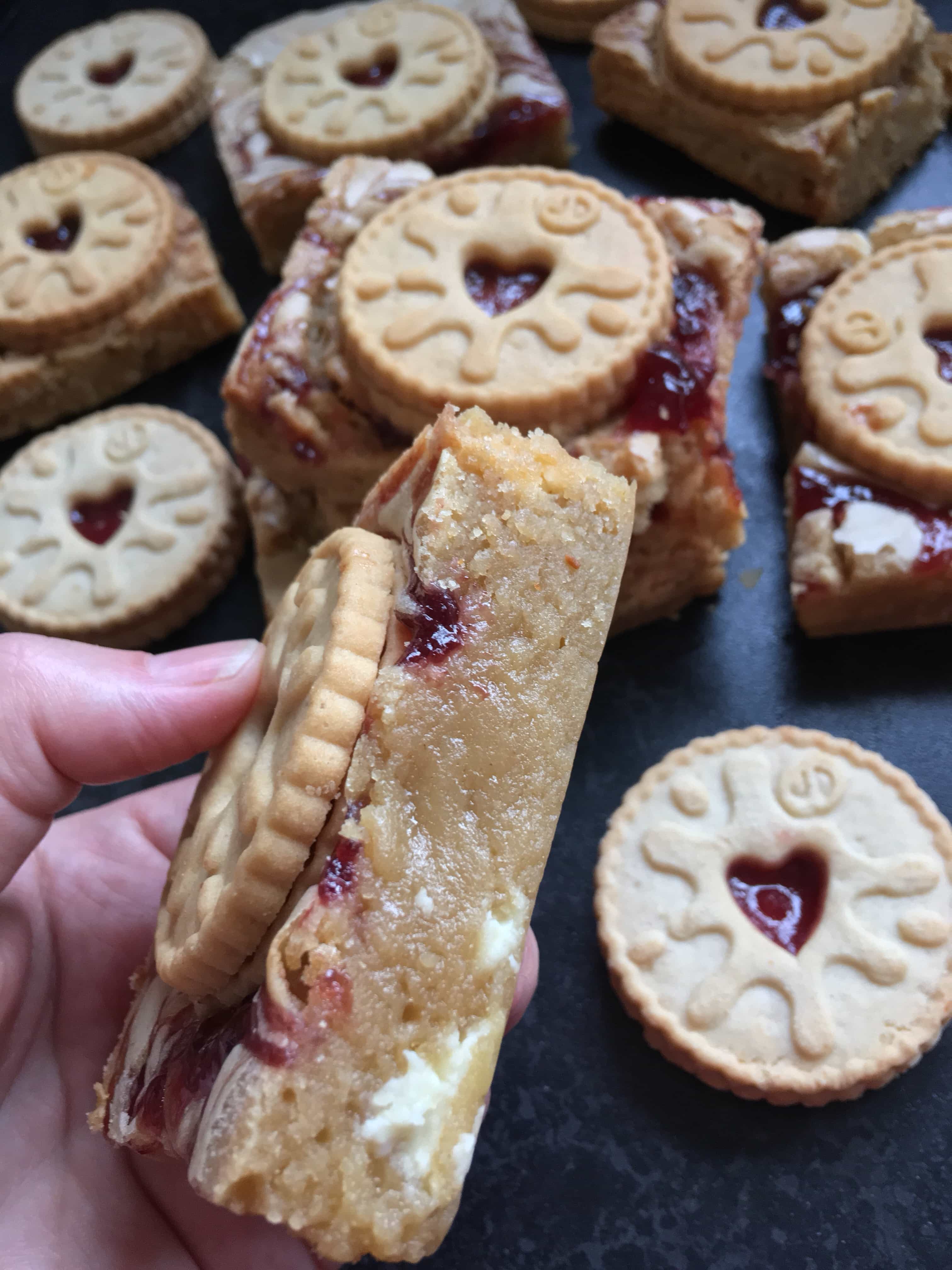 what’s the best white chocolate to use for baking?

I do recommend using a bar of good white chocolate or chunks for this recipe instead of the smaller chocolate chips, which tend to melt and disappear into the blondie base. I love Callabeut chocolate chunks for baking, but I also use any premium supermarket brand.

It is worth spending a little more on a decent bar of white chocolate for your blondies – the flavour will definitely come through in the finished bake.

I wouldn’t use the super sweet confectionary such as Milkybar here – they don’t hold up well in baked goods. And steer well clear of anything branded “cooking” chocolate!

My blondies fell apart when I cut into them

Don’t attempt to remove blondies from the pan until they are completely cold – if you try to cut them while they are still warm they will collapse.

I often leave blondies overnight to ensure they cut into perfect squares.  If you are less bothered about this, I would recommend leaving them to set for at least 3-4 hours before cutting.

my jammie dodger blondies are too gooey!

Don’t they bake so pretty? Look at those jam swirls!

Make these for the jammie dodger lover in your life and I guarantee they will love you forever!

The blondies will keep in an airtight tin for up to five days. You can also freeze them – wrap the blondies tightly in clingfilm and tin foil before freezing for up to two months. Defrost fully at room temperature before eating.

did you make this recipe?

I hope you love them as much as we do! I would love to hear what you thought – let me know by leaving a comment below and rate the recipe out of five by clicking on the stars in the recipe card.

got any questions about the recipe?

If you have any questions about the recipe, leave a comment or get in touch via my social media channels and I’ll try my best to help.

I used raspberry jam, but you could of course use strawberry if you prefer.

When you line the baking tin, make sure the baking paper is above the edge of the tin by at least 2cm. This makes your life much easier when removing the blondies from the tin - you'll be able to lift them right out of the pan.

This recipe makes 9 LARGE blondies, but of course you can cut them into smaller pieces if you like!

If you leave the blondies until they are completely cold before cutting into them they'll be much easier to cut into neat squares.

You could also use mini Jammie Dodgers to decorate the top instead of the large biscuits.

.If you can find the lemon Jammie Dodgers that are on sale in the supermarkets right now, you could try a lemon version of these blondies - just use lemon curd in place of the jam. Yum!

Wow, those jammie swirls are crazy amazing Nickki! I had no idea you could get lemon Jammie Dodgers, I’m gonna be a woman on a mission! 🙂 xo

yep I could dive right into these beauties!!! they just look so pretty and so delicious! thank you for sharing with #Bakeoftheweek x

What are you doing to me Nickki! lol These are simply ridiculously insane! Soft and squidgy blondie is definitely my preference too and that swirl of more jam on top! Yum! 🙂 Thank you for sharing with #BakingCrumbs x

Thank you so much! Yes I have to admit, I absolutely love these blondies – they are a new favourite. #BakingCrumbs x

Thanks Amanda ? I haven’t found any myself yet, but I’ve seen pictures on Instagram! They look pretty promising! x

These sound divine.I have never made blondies before but I’m on it.Pinned!x

Lemon Jammie Dodgers! No way! I definitely have to go on a mission to find some! These look fabulous Nickki – I’ve tried Jammie Dodger Blondies before and they were amazing – everybody loved them and yours look equally as scrummy 😀 Thankyou for sharing with #BakingCrumbs
Angela x

I know! ? I haven’t found them yet myself, I hope you do! Let me know how they are if you find them! Thank you so much, they are a very popular bake and no wonder, they are delicious ? x

[…] Jammie Dodger Blondies by Nickki from Something Sweet Something Savoury are something else! Soft & squidgy blondie […]

Brilliant, so glad you enjoyed them!

Hi, I made these today and they turned out a bit too cakey even though I only cooked them for 35 mins. (Not to worry though they were still delicious!) What would you recommend to stop this happening next time? Thanks so much! X

Hi Claire, glad you enjoyed them! I would maybe bake them for 25-30 minutes next time. They used to take 40-45 minutes in my old oven but in my new one they only need about 30 minutes. So it really depends on how hot your own oven runs 🙂

Hi, It isn’t a cookie mould cutter, the heart shape is the biscuit you place on top of the blondie 🙂

Hi how would you make this for a 10inch tin. Thank you

Hi Alice, without testing the recipe myself I can’t say for sure, but I think it could be done. The blondies will turn out thinner in a 10 inch tin and they won’t take as long to bake so you’ll need to adjust the baking time. Good luck! 🙂

Hi I was wondering can you make these without chocolate? Thanks!

I haven’t tried it, but I don’t see why it wouldn’t work. Let me know how it goes if you try it 🙂