Do you like Ferrero Rocher Chocolates and Nutella? Who doesn’t I hear you say? Well do I have the perfect recipe for you! Those Ferrero Rocher Blondies are simply irresistible! 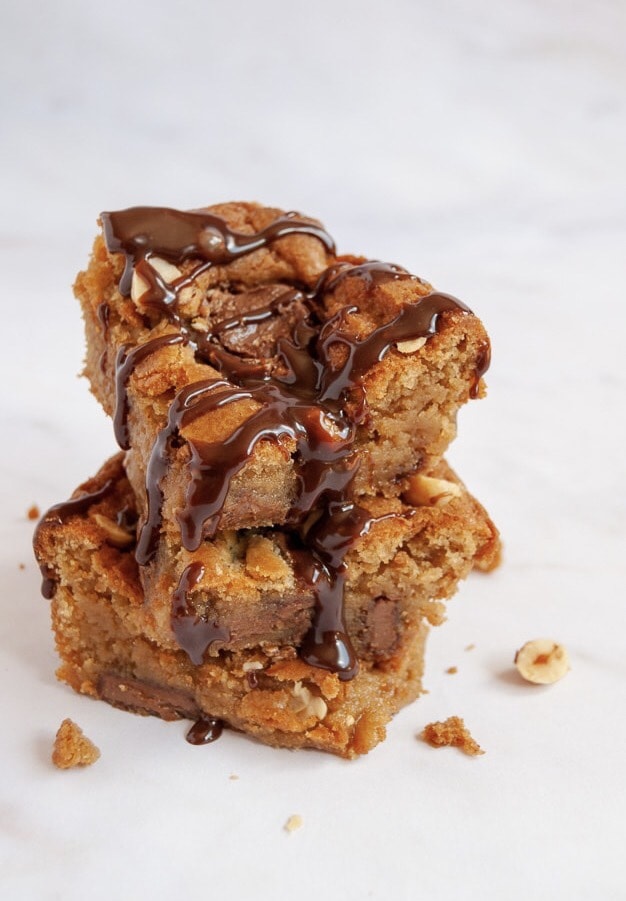 What is a blondie?

A blondie is basically a butterscotch version of a brownie. Think of them as the blonde, cute sister to the dark and sultry brownie.

The predominant flavours in a blondie are vanilla and brown sugar. They are super adaptable – you can add coconut, dried cherries, chocolate chips, or caramel to name just a few ideas. 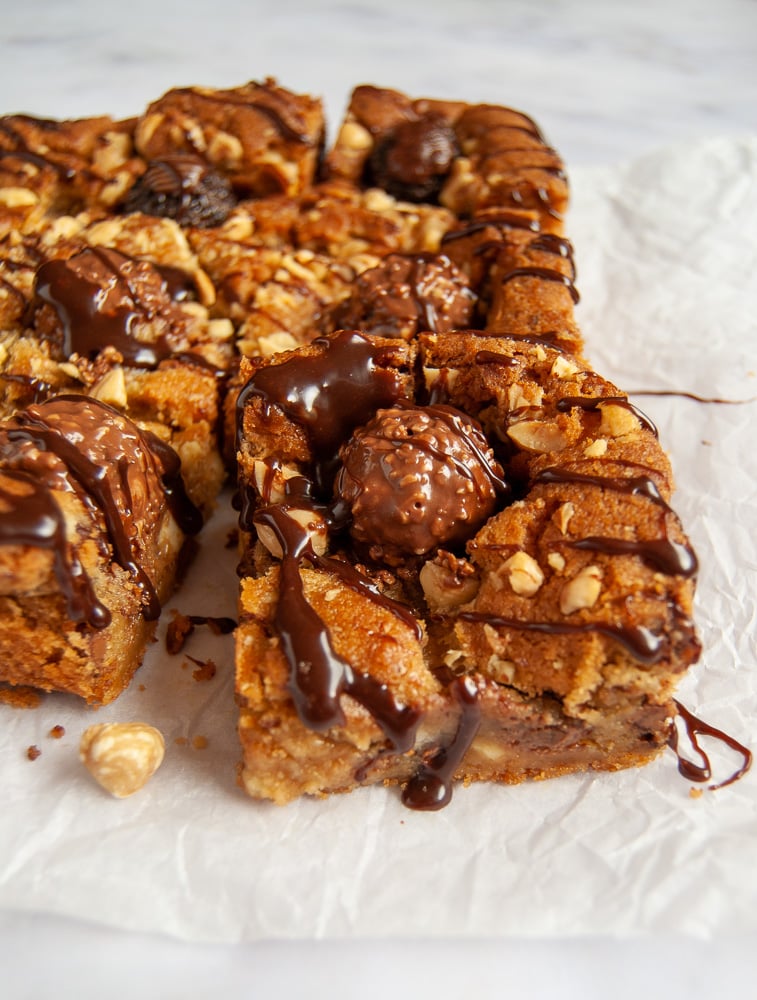 I’ve added the classic Ferrero Rocher chocolates and a handful of chopped hazelnuts to my go to blondie base.

I felt the urge to take things a step further by drizzling them with a Nutella glaze…I mean why wouldn’t you??

The textures in these blondies are really something else. You get the soft, gooey blondie base, crunchy hazelnut, crispy wafer and the unmistakable taste of Nutella. They are heavenly! 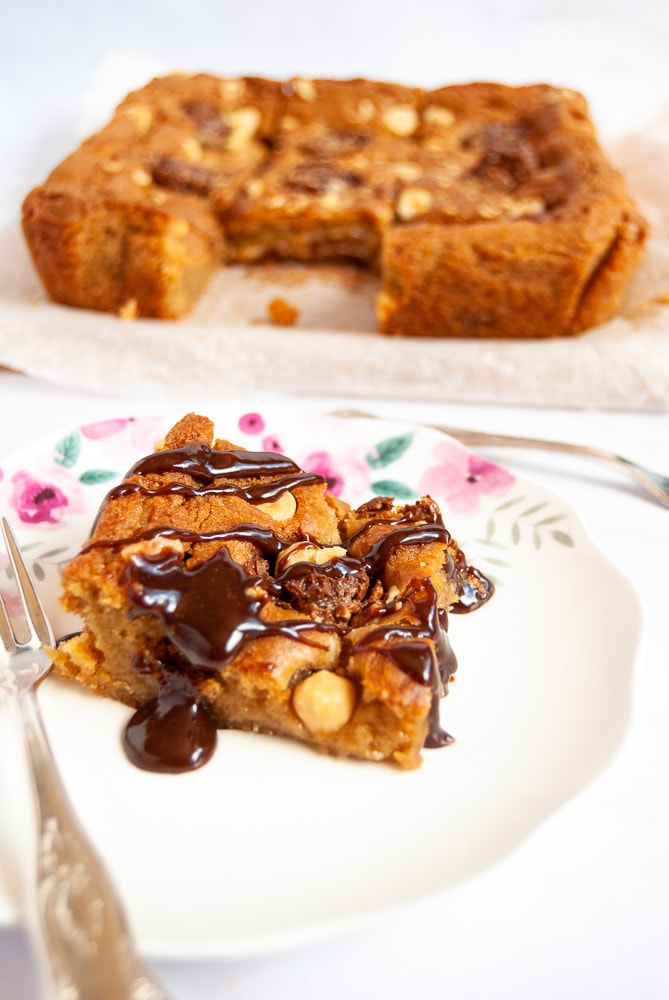 How long will the blondies keep for?

They will keep in an airtight container for up to 4 days. Any leftover Nutella glaze will keep for up to 5 days in the fridge. The glaze is also delicious poured over ice cream, waffles, pancakes or banana cake! Simply reheat gently before serving (you might need to add a little more cream to loosen it up 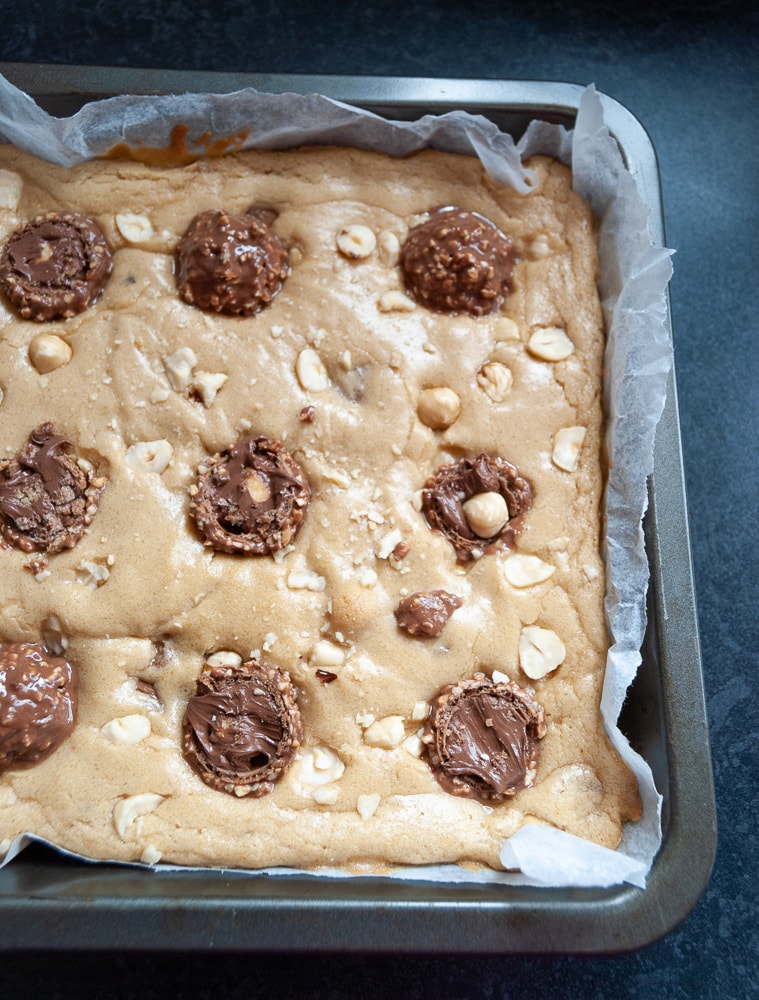 FOR THE NUTELLA GLAZE

For the Nutella Glaze:

For an indulgent dessert, serve the blondies and the Nutella glaze with some vanilla ice cream!

Oh my, those look absolutely divine! What a wonderful treat.

Thanks Janice. They are definitely a real treat!

Oh my goodness, yes! How could anyone refuse one (or two) of these! Love Ferrero Rocher chocolates! These are an absolute treat!

Oh my goodness, these Blondies look so mouth wateringly delicious. Can you believe I’ve never made Blondies before – this has to be put right after seeing these:-)

Thanks Christina! They are pretty hard to resist!

Thanks Camilla, you must give them a try!